While the rates for the U.S. Postal Service's two- to three-day Priority Mail service are changing to more accurately reflect processing and delivery costs, Priority Mail will remain highly competitive and affordable for shippers.

The good news is that the rate change means a decrease or no change in rates for items traveling shorter distances, with increases in rates for more distant items. "Even though we're increasing rates in the more distant zones, the rates will be competitive compared to other carriers," Scherer explains. Priority Mail competes in the two- to three-day package and document delivery market. "We've been losing market share in shorter haul shipments but not in the longer hauls," Scherer says. He notes that around 1996, the Postal Service began to lose package volumes within the first three zones or up to around 300 miles.

Recent advertising campaigns by the UPS and FedEx show the hotly competitive nature of the two-day delivery market. While competitors are able to give volume discounts the Postal Service can't due to regulatory restrictions, the Priority Mail still offers better-than-competitive rates. Unlike the competition, the Postal Service has no surcharges for residential or rural delivery, or hefty additional fees for Saturday delivery. And you can print your own postage labels for your Priority Mail packages through the Postal Service's Web site, www.usps.com.

Under the new rates, flat-rate Priority Mail envelopes will be priced at one-pound rates. For B2B shippers and consumers, this means that flat-rate envelopes for one pound or less Priority Mail packages will actually see a slight decrease from $3.95 to $3.85 per envelope. "Mailings over a pound will be zoned unless a Postal Service-supplied flat-rate envelope is used in which case you pay only the one-pound rate, which doesn't vary by zone," Scherer says. About 37% of the Postal Service's Priority Mail volume is one pound or less.

By retaining the unzoned one pound and under rate, mailers using stamps will be able to drop Priority Mail pieces weighing up to a pound in Postal Service collection boxes, avoiding a trip to the post office. Regulations require stamped parcels weighing over one pound to be entered across the counter at the Post Office. Metered mailers can deposit Priority Mail weighing over a pound in collection boxes.

Back to Zoning for Higher-weight Shipments

Priority Mail has been around since the late 1960s. The Postal Service enjoyed moderate growth in the 1980s and even stronger growth in the 1990s. As Scherer explains, beginning in the 1980s, the Postal Service unzoned its rate structure in two phases. The first stage, for lower-weight Priority Mail, occurred in 1985, and three- to five-pound categories were unzoned in 1991. "At that time, our competition had similar rates that didn't vary by distance shipped. Our competition moved to distance-based pricing sometime in the 1990s," Scherer explains.

For example, under the old rates, a four-pound Priority Mail package being shipped across any number of zones was $6.45. Under the new rates, the equivalent four-pound package moving across one, two or three zones would cost $5.30. The same package moving across four zones would be $7.05, on up to a maximum of $10.35 to move across all eight zones, say Maine to Los Angeles. As Scherer notes, four-pound packages shipped within zones one through three will ultimately see an 18% decrease, while the eight-zone Maine to Los Angeles example represents a 61% increase. Metering technology, associated software, online rate calculators and easily available zone charts allow zoned-rate mailers to calculate and pay proper postage.

For more information on the new rate, please visit their Web site at www.usps.com/ratecase. 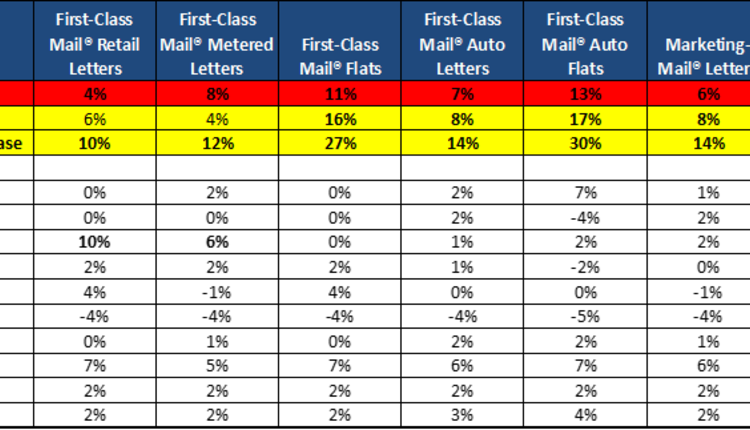